As a consumer phenomenon, Esports continues to grow its huge base of passionate fans across the globe.

Esports business is entering a new and critical phase towards maturity. Big investments have been made and new league structures have been launched. When sponsorship budgets have moved from experimental to continuous and international media rights trade is starting to heat up. The Esports industry is coming into a crucial step in which the pace of growth in different areas and other accelerating factors will determine how fast it will become the multi-billion-dollar industry that many anticipate. This year will be pivotal in determining the future of the Esports scene.

ESports describes the world of competitive, organized video gaming.The first known competition took place in 1972 at Stanford University on Spacewar but it was in the early 2000s in South Korea that the phenomenon really gained popularity and quickly became global. Competitors from different leagues or teams face off in the same games. These gamers are watched and followed by millions of fans all over the world, who attend live events or tune in on TV or online. Streaming services like Twitch allow viewers to watch as their favorite gamers play in real time, and this is typically where popular gamers build up their fandoms.

What is the audience reached by esport?

As a result of this growing audience, companies are increasingly looking into this phenomenon either to be a part of it with their own team or either to sponsor a current team to get more visibility. It has the particular interest to be part of the new distribution channels to touch millennials, while they shunned more and more traditional media such as television.

While it is easily possible to imagine the support of endemic brands in the video game and electronics sector, such as Intel, Asus, Alienware or Micromania, in France, brands such as Orange and Volvic are now sponsoring teams of players. This interest is worldwide, and concerns more and more brands, including Coca-Cola or Adidas, which partially explains the increase in the size of the market. 42% of people watching streaming are not playing the game themselves — so it is not limited to the cliché of the nerds who want to get better at gaming, this space is turning into a legitimate entertainment market.

Esports show no signs of slowing down. In fact, they continue to grow at a massive rate: 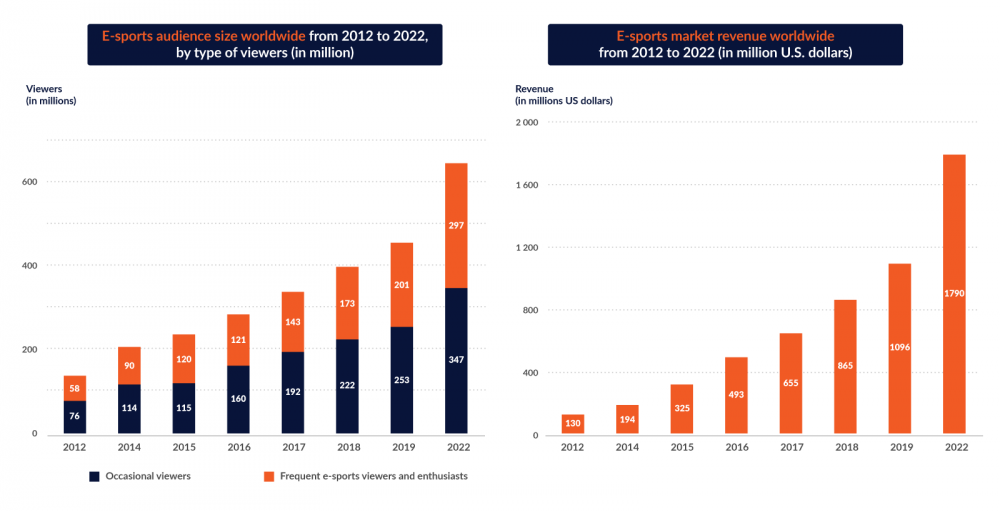